Reclaiming a Lost Heritage Through the Intersectionality of Art, History, and Medicine 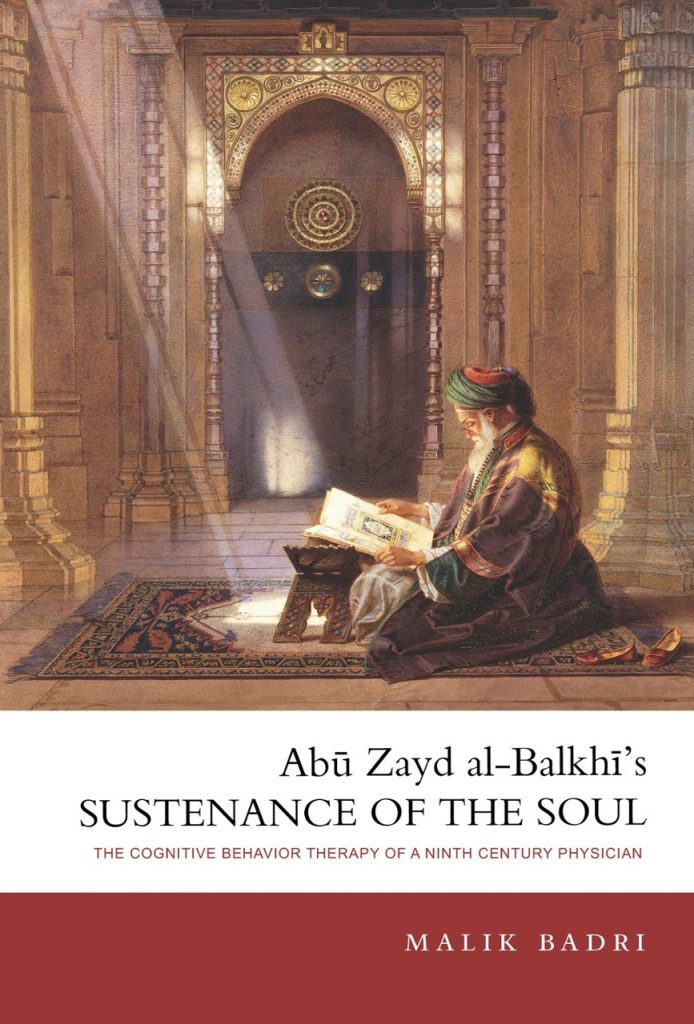 Cover image of Abu Zayd al-Balkhi’s Sustenance of the Soul: The Cognitive Behavior Therapy of A Ninth Century Physician

“While recovering women’s history is a worthy endeavor, as is educating readers about the production of female artists and patrons and the reception by a female audience, such inquiry should also lead to critiquing the structure of the discipline and of society itself. To quote Gouma-Peterson and Mathews, ‘[. . .] this is a viable and valuable goal, but many would claim that education, even ‘encouraging institutional change in art education,’ is useless until the ideological underpinnings that support female repression are understood and exposed.’”[1]

The above is an excerpt from “Continuing the Discourse of Feminist Scholarship and the Study of Medieval Visual Culture,” written by the esteemed Dr. Rachel Dressler. Dr. Dressler is a prominant scholar in feminist medieval studies for decades. More personally, she is one of the most influential professors that I had the pleasure of learning from during my undergraduate career. She taught that art is a form of communication from the past, as well as a living entity, affecting present-day values. My understanding of the importance of art and history broadened beyond an elective requirement for my science degree, and her lectures impacted me profoundly–so much so that I was inspired to write a blog post in 2020 reflecting on a lesson from her course Gothic Art and Architecture.[2]

I am now a second-year medical student at Albany Medical College. Although far from the realm of medieval art, I was reminded of Dr. Dressler’s class while putting together a presentation on the history of psychiatry. I had come across a ground-breaking study published in 2015 in the Journal of Affective Disorders. It posited that a ninth-century Muslim scholar of theoretical medicine, Abu Zayd Al-Balkhi, documented Obsessive Compulsive Disorder (OCD) in a manner nearly identical to the current Diagnostic and Statistical Manual of Mental Disorders, 5th Edition (DSM-5), the gold standard classification of mental disorders in the United States. This was contradictory to the widely-held belief that modern concepts of OCD only evolved in the nineteenth century, a millennium later than Al-Balkhi’s time. His thorough analysis of OCD included a clear, systematic review of the disorder, holistic treatments that included what is now known as cognitive behavioral therapy, and perceived barriers to treatment such as cultural stigmas.[3]

Reading these findings transported me back to my undergraduate art history course. Amidst the construction of ornate rose windows and flying buttresses of Gothic cathedrals, the medieval period of Europe coincided with the Golden Age of Islam. Dr. Dressler had alluded to the advancements and contributions of Muslims in her lecture, and I had felt empowered with the knowledge of what my ancestors had accomplished. Upon further research into Al-Balkhi, I found that he hailed from Balkh, Khorasan, which is now modern-day Afghanistan.[4] The sentiment of empowerment from Dr. Dressler’s class transcended, and my identities as a Muslim, Afghan, and future physician intertwined–my view of medicine shifted from an interest to a heritage.

It is an understatement to say that the effect of this empowerment is strictly personal. The implications of Muslims pioneering the classification of mental disorders as medical conditions stand in stark contrast to the attitudes of many Muslim-identifying cultures. Mental disorders have long been characterized solely as a spiritual problem and directly correlated to a weak faith in God.[5] While modern, Western approaches to mental health eventually identified the medical aspects of these disorders, Al-Balkhi’s approach encompassed and respected the importance of a patient’s religious beliefs and culture. He navigated the gap between spiritual beliefs and medicine by explaining OCD in the context of both paradigms, and by doing so, he effectively removed the misunderstandings that posed a significant barrier to seeking treatment.[6] This notion of cultural competency is a term that had only started to become consistent in medical literature in the late nineteenth century[7], and it once more proved Al-Balkhi to be ahead of his time.

The effects of the 2015 study extend on an even larger scale to the reputation of the Islamic Golden Era. Prior to its publication, it was assumed that “many of the achievements of the Islamic-Arabic Golden Age were based on previous initiatives taken by the ancient Egyptians, Hebrews, Persians, Greeks, and Romans.”[8] The ethnocentric tones of this statement echo the European nationalism of the nineteenth century fed by the romanticism of the Middle Ages–the same romanticism that drew Dr. Dressler into studying this period. In her blog post, Growing Up in the Shadow of a Mountain, Dr. Dressler recalls realizing the fallacy in romantic notions of the medieval period and knighthood upon researching the subject-matter during her training, and a similar process occurred as she dissected the culture and origins of where she grew up in the South. With the mirage of romanticism faded, she embarked on a mission to purge not only her academic perspective of these distorted ideas, but also parts of her identity as an American.[9] Although a difficult task, Dr. Dressler recognized her responsibility as a scholar to examine history with a just lens–not a lens that is blurred by personal bias or sentiment. Throughout her career, she strived to teach art history in a socially conscious manner, and perhaps even more importantly, she didn’t stop there.

In “Continuing the Discourse,” Dr. Dressler brilliantly asserts that recovering history and teaching it is not enough–we must understand “the ideological underpinnings that support repression.”[10] We must think critically as to why the magnitude of Al-Balkhi’s contributions is only recently being uncovered. What flaw in the study of medical history, or the ideology of medical historians, allows for discourse suggesting that Muslims primarily took ideas from other peoples? While some may argue that this level of systemic scrutiny is unnecessary, the consequences of not doing so, and their wide ranging implications, cannot be ignored. Our obligation to present and future generations includes the proper retelling of the past. Uncovering history goes beyond just giving proper credit where it is due–it is removing the pretense of false notions being used to shape modern beliefs. Although there has not been a purposeful omission of history, vital discoveries have remained buried for millenia, just as in the case of Al-Balkhi.[11] By recognizing the etiology of why this occurs, and not just its symptoms, there is hope to prevent recurrence and promote healing.